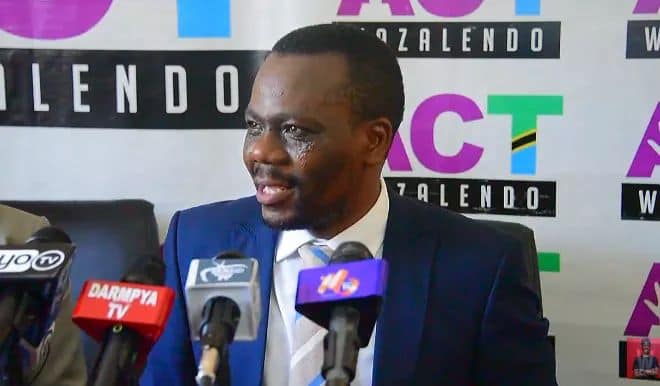 This morning, ACT Wazalendo Campaign Manager, Emmanuel Mvula was arrested on spurious grounds. He was arrested at the Oysterbay Police Station in Dar-es-Salaam where he was following up on the arrests of three members of the ACT campaign yesterday at the party’s offices in Magomeni, Dar-es-Salaam. These arrests were made as a result of allegations of so called “cyber-crimes”. Mr. Mvula has subsequently been released yet the three campaign team members remain in detention.

We have been informed that the Tanzanian Police are now on a witch-hunt of ACT’s Mainland Campaign Chairperson and Deputy Secretary-General, Joran Bashange and as well as the remainder of the Mainland Campaign Team.

These developments are a further indication of how the Tanzanian Police Force is being used as a vehicle by the governing CCM to silence and intimidate the opposition ahead of the General Election on 28 October 2020. We refuse to be bullied into silence but a repressive establishment intent on shutting down the democratic space in Tanzania. We will not relent in our campaign to bring change to Tanzania.

Following the unfair and unprocedural disqualifications of opposition candidates, the violence inflicted on opposition candidates and supporters over the past two months and the use of state organs for partisan aims, it is evident that the 2020 Tanzanian election can already by characterized as not free and fair.

Nevertheless, our mission is too important for the future of our country to be stopped. We will continue to exercise our democratic right to campaign and together with our opposition brothers and sisters, we will bring change that grows the United Republic and brings decency and happiness to all.

We once again repeat our call for the National Electoral Commission (NEC) to set out and enforce requirements for a free and fair election. We will be writing to international and regional bodies, including the African Union, Southern Africa Development Community and the East Africa Union to catalogue abuses of power to date and to ask them to take all necessary steps to ensure the Tanzanian government does not interfere with the exercise of the people’s democratic will.